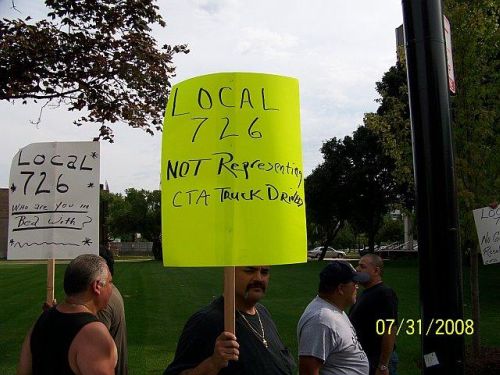 July 31, 2008. Chicago Union truck drivers are getting the shaft from Mayor Daley and Ron Huberman. Every Union worker in Chicago needs a fair and decent contract to put food in the mouth of their children. The Drivers picketed in front of Teamsters City, they were supported by Angelo Fata, a leader for many Chicago teamsters working for the City of Chicago. Also standing up for the protesters was the “Fighting for the Future Slate”, which might take the reins over at Teamsters Local 726. The last election is under Federal review. The local union is not doing its job and workers are getting the shaft. I suggest they picket at Mayor Daley’s friends trucking company, Tadin. Tadin has many trucks that pay the workers by the load, and the Teamsters have not made this company clean up its act. Good Union jobs are leaving Chicago, and workers are wising up the Daley and the destruction of Union rights in Chicago. Wake up Chicago Union workers, Daley never saved a penny of taxpayer money and he is going to fire you soon. Dennis Gannon should ask why Tadin is non union. Patrick McDonough.