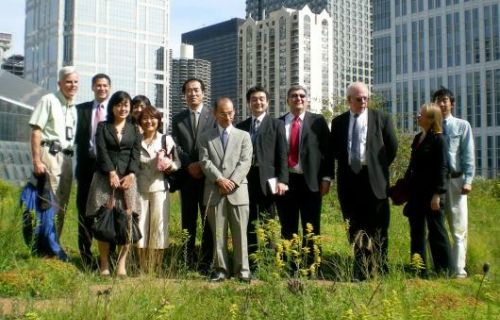 September 19, 2008. When Alderman Manuel Flores shows off the City of Chicago to famous Japanese HOSEI University professors, he made sure he invited Michael McGann to explain various technical green issues. Alderman Flores spoke on many topics and impressed the professors with his expertise on many subjects including items that will assist the professors starting a new Green Environmental Management Department at the University. Michael McGann a Plumbing Inspector, spoke to the group about protection of our potable water supply, water distribution systems, health and safety issues in the plumbing industry, and Plumbing Inspectors responsibilities. Mr. McGann spoke about the Jardine Purification, Stickney Sewage Plant, the T.A.R.P. system, combined sewer systems, green water efficiency, the U.S. Green Building Council and Leed certification. The tour of the Green Roof on top of Chicago City hall was a success. Michael McGann took a vacation day and deserves praise for a job well done. Tomorrow, Mr. McGann is scheduled to become an acting Plumbing Inspector-in-charge, based on the Shakman terms and Local 130 collective bargaining agreement. I hope the City of Chicago Plumbing Division does the right thing and will allow Mr. McGann his fair turn. I little bird told me some political back fighting might stop his turn. I hope that is not the case. The Plumbing Inspectors need professional supervision to avoid more scrutiny with ongoing Federal investigations. I think the taxpayers have had enough. Photo edited by Patrick McDonough