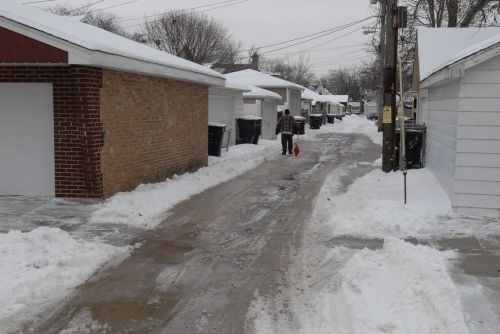 Alderman Pat Levar was in the local Chicago newspapers making a scene about the lousy way Mayor Daley was handling the snow removal in January this year. Chicago cut back on the services as Mayor Daley was trying to save money. This snowstorm was poorly handled and started a firestorm of protest against Mayor Daley. While all the suckers in the 45th Ward re-elected Levar again, they should have looked at Levar’s alley that was salted and plowed. The plowing started right at Levar’s garage to Sunnyside Avenue. I love when Alderman scam the system for their own benefit. The rest of the suckers in the alley put up with this time and time again! Vote for Levar again! Picture taken December 19, 2008