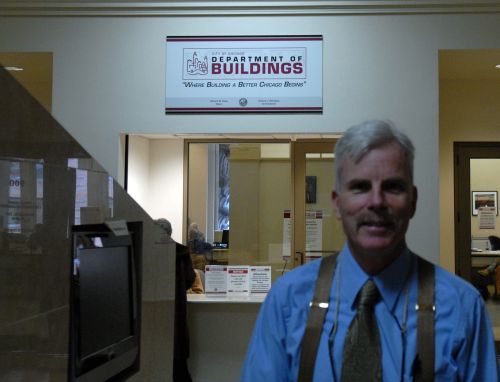 I hope all Chicago City Workers know we are there to help you. Michael McGann and his family were put through hell. Thanks to Fran Spielman of the Chicago Sun-Times and Chicago Clout for making this important story public. Photo by Patrick McDonough.]]>Inspector who revealed plumbing woes at Jose de Diego Community Academy gets suspension overturned
Michael McGann says 15-day punishment was 'vendetta' for being a whistleblower
April 16, 2009
BY FRAN SPIELMAN City Hall Reporter/fspielman@suntimes.com
Chicago's Human Resources Board has overturned a 15-day suspension against a city plumbing inspector who uncovered "two pages worth" of building code violations that left 1,100 children at Jose de Diego Community Academy without water for weeks.
Michael McGann has maintained that the suspension was in retaliation for his decision to fax his inspection report to the school's principal and talk to the Chicago Sun-Times about the violations.
In overturning the 15-day suspension McGann has already served, the Human Resources Board apparently agreed. The Mayor Daley-appointed board ruled that there was "insufficient evidence" to justify the punishment.
The $85,068-a-year plumbing inspector is now in line for back pay.
"It was a vendetta. They tried to cover up the fact that there were health and safety issues at the school. They quashed my report and the two pages of violations that I found. Then, the supervisor lied and said I created mass hysteria at the school," McGann said Wednesday.
"Because I blew the whistle, they opened a can of worms against me. They were trying to shut me up. I've been vindicated now. The moral of the story is, you shouldn't be afraid to be a whistleblower."
McGann noted that the former supervisor who initiated the punishment, Mario Olivella, was subsequently indicted for accepting cash bribes and lucrative gifts from developers and contractors in exchange for ignoring building code violations and speeding up paperwork.
"He was the person who started it all," McGann said.
Buildings Department spokesman Bill McCaffrey had no immediate comment on the board's decision.
Last year, McCaffrey said the punishment stemmed from the fact that McGann violated internal rules that prohibit preliminary inspection reports from being shared with outsiders until approved by higher-ups.
"Inspection reports are subject to review by immediate supervisors and chiefs. Until the report is approved, it is still a draft document," he said then.
McGann said he gave the October 2007 report to the de Diego principal, Alice Vera, so she could use the information to try to expedite repairs that had languished for weeks, endangering students at the 116-year-old school at 1313 N. Claremont.
The embarrassing story of his bosses' bureaucratic bungling –causing the school's 14 water fountains to be taped shut for weeks — ended up in the Sun-Times, with a copy of the inspection report posted on the newspaper's Web site.
The report contained two pages of code violations with "dead-ends everywhere . . . uncirculated distribution lines that connected to and endangered" the integrity of the drinking water system, McGann said.