The City of Chicago received multiple phone calls from a retired worker in the North District Water Department. Remember, if you are an employee of the City of Chicago, the ex-employee might be looking to get information to privatize or set you up in a sting. Make sure you are not doing favors for any ex-employee; make sure you report this activity to the Chicago Office of the Inspector General. Keep your job, report fraud. Do your job by the book; the old days are gone for good. Patrick McDonough 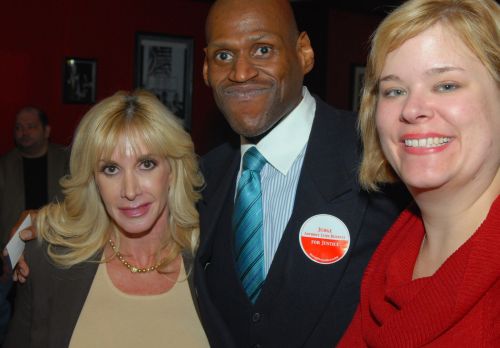 November 4, 2009 City of Chicago employee Carmen Hernandez has proudly served his country time and time again. When he returned from reserve duty protecting our United States, he noticed the American flag ripped and torn. A complaint was also made by Bruce Randazzo to replace the flag located at 4900 West Sunnyside, a Chicago Department of Water Management site. Carmen took down the old and dirty American flag, disposed of the flag in a proper manner, and Carmen installed a new American flag. Carmen purchased the new flag with his hard earned money. God Bless America and God Bless Carmen Hernandez! Photo by Patrick McDonough

Two days in a row on City of Chicago worksites for Premium Sound and Security from the suburbs. This company hires a tech that thinks scale is 11 dollars and hour! Who pockets the difference? The law requires these people are paid prevailing wage when working for the City of Chicago. This company drove onto the City property with no authorization and did not check-in. The Electricians Local 134 Union was notified and I spoke to Michael Davis and he promised to get in touch with Michael Nugent, the union representative for sparkies at the City of Chicago. The City of Chicago is so lazy; they allow anyone to drive into the property unchecked. Years ago when they were gunning for me, they dispatched the OIG to see why I was taking a picture of my crew in the yard. It is no surprise the truck they were concerned about was mine, 1308, the most famous investigator truck in water department history. If this young man is cheated out of a fair wage, then the company needs to be removed from Mayor Daley’s contractor buddy list. City of Chicago residents have no work and Daley farms out more work to his Lake County operatives. I also commend Channel 2 news for exposing the 11Th ward Water Department crew helping privatize the Department. Daley wants to get his hands on the Department because he bankrupted Chicago, just like I told you years ago.