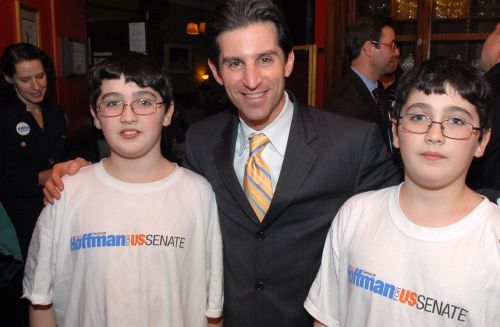 The Celtic Knot is a wonderful Irish Restaurant in Evanston, Illinois. It has wonderful food and tonight January 21, 2010 was visited by a wonderful and enthusiastic group of Democrats supporting David Hoffman for U.S. Senate. Davis Hoffman was joined by two young Irishman that are some of his most excited supporters. Michael and David McDonough told me they are telling all their friends to have their parents vote for Mr. Hoffman in the election just a few short days away. I hope all of you well educated voters make sure you tell everyone to vote this primary election. I also agree with my children and will vote for David Hoffman. As a parent I reward my children for wise choices, I recommend all voters reward David Hoffman for making wise decisions while in public service. I must admit, candidates like David Hoffman give all of us a reason to go to the polls and vote. David Hoffman was also joined by Chicago City Workers tonight including teamster local 700 leader Angelo Fata and Operating Engineer Saul Charak. Most of the people in attendance were very passionate in their support for David Hoffman. Photo by Patrick McDonough.