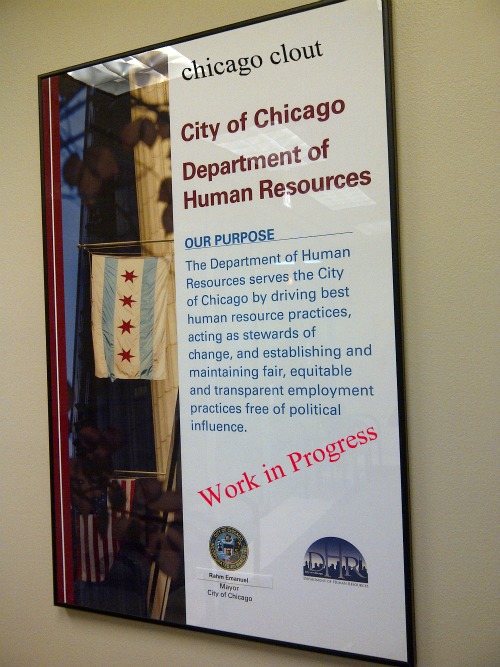 Dennis M. Fleming, an attorney, chairman of the Chicago License Appeal Commission, administrative law judge and hearing officer spent the last two days making a mockery of Justice in Chicago. I spent the last two days at the City of Chicago Department of Human Resources watching one city worker after another walking out of an appeal hearing. Simply put, Bruce Randazzo is attempting to clear his name from a disciplinary action the Department of Water Management made against him. Bruce Randazzo is a politically active Democrat on the Northwest side of Chicago. Bruce Randazzo has stood up to corruption and reported several incidents that should have been actively investigated by the Chicago Office of the Inspector General. In all fairness to the OIG, I am not privy to the status of any investigation since I am active city employee. (Disclaimer)
So why am I concerned? The City of Chicago uses Hearing Officers as a political carrot to judicial wan bees. I am seeing the use of Hearing Officers in too many situations in Chicago. If you receive a parking ticket in Chicago, a Building Code Violation, you could get an appointed flunky lawyer not familiar with the laws that apply to your situation. I have firsthand seen too much unprofessionalism at the Building Violations Court. Maybe if the OIG steps downstairs once in a while, we can straighten that out. I really believe Chicago taxpayers should demand and want a real judge free from any political process deciding what is legal and right.
So… back to the story, Bruce Randazzo was in the Hearing Board on January 11 and 12, making his side of the case. I made the appropriate phone calls because the hearing officer was not allowing much evidence into the record. I overheard city worker after city worker laughing about the hearing judge attempting to shut down any avenue that was not favorable to the city. When ordinary working folks smell a fix, it’s a fix. When city workers smell a fix, it is defiantly a fix. My impression is Fleming got a phone call from an attorney representing one of the witnesses for the city. Two critical witnesses famous for their political work walked in and then right out of the hearing. I cannot fathom how the hearing officer can make a determination without hearing evidence.
If you are a City of Chicago employee and want to clear your name, you might be wasting money hiring an attorney. I waited in City Hall room 1100 all day on January 11, 2012 waiting to testify. No one from Plumber’s Local 130 ever showed up. I was told a Local 130 representative could not show up because it was the city’s fault that they did not notify the union. I drove back to the yard at 4900 Sunnyside and then my tires were slashed. I was expecting a representative to show from the Union today but no one showed up. I got a call when I was in the hearing testifying. When I was testifying, I got the impression the hearing officer never understood the rules that allow more openness in admitting evidence than the circuit court. I was also happy to hear Chicago Clout was mentioned during the proceedings. I admit Rahm Emanuel is a much better Mayor than Daley ever was. Emanuel is ten times the Mayor, but he needs to clean out the old Daley holdouts. I would like to make a spin on the legal system. The Chicago legal system is like making sausages, but as a plumber the legal sausages sometimes look like sh*t.
I will have more details soon. Enjoy.