Alderman Allen is supposed to watch out for his ward. Alderman Allen’s neighbor has a project in the building he shares with a tenant right next door. As you can see by this picture a massive dumpster is parked right in front of the building. Before any work starts a permit is to be clearly displayed in the front window. I spoke with two of Alderman’s staff, Peggy and Rita. I asked what was going and they knew nothing. They assured me they are going to report this activity to the Building Department. I think Alderman Allen make sure the building had a permit as this brings in income to the city. Tom Allen might have turned a blind eye on this project for one reason or another. Tom, please, if you see a dumpster as big as a truck in the front of your building, check for a permit, the city is broke. Do you know who owns this building? The address is 5817 and 5821 West Irving Park Road in Chicago. Photo by Patrick McDonough

Please say a prayer for the dead man on the left of the picture. Chicago Police deal with this all the time, the least we can do is honoring them with a contract. Mayor Daley has failed to keep drugs off the street. People are found on the streets all the time dead. Daley and the boys will make sure this guy votes for Obama in the next election! This man has rigor mortis set in; he has been dead for at least two hours. Tell your kids to stay off drugs and do the right thing. I still say Mayor Daley should drug test each and every Chicago City employee. Photo by Patrick McDonough.

Thank you everyone for our new game show “Who got that bribe?” Say it louder “WHO GOT THAT BRIBE?” Let me explain to you how the game works. Contractors take short cuts to save money. The unsuspecting homeowner has no clue until later. I will give you a real money saver for contractors, instead of a brand new water service from the water main to the brand new piping at the meter in the house; the contractor gives a bribe to the Plumbing Inspector. The Plumbing Inspector gives a cut to his boss, and up the chain we go! A contractor saves tens of thousands by not putting new pipe in and the homeowner has no clue! You can put a phony piece of copper in near the foundation and cover it up, or put a new copper service in from just past the round way (shut off valve) in the parkway. I hope the Plumbing Inspector that inspected this home goes back to make things right, I would hate to see someone go to jail over this! Remember the old saying; do onto others as you wish them to do onto you! Photo by Patrick McDonough. Note: part of the photo is edited out until later.

Today at Hubbard and Elizabeth, a suburban contractor takes work from the Chicago City Worker. The contractor is from Bourbonnais, Illinois, what ward is that Daley? Mayor Daley, I know you need to raise money for Barack Obama, I know the Chicago City Worker are not kicking in for the phony tickets and cash shakedowns like your good old days, but this is a joke. The Bureau of Forestry has cheated City workers out of overtime this last storm because you said the City is 420 plus million in the hole and you put a private contractor on the taxpayer’s payroll? Who is going to get a little something for that arrangement? It seems to me Chicago City workers get the shaft again. This company had an army of dudes servicing the near north side of Chicago; I hope Daley does not send these guys into the rough neighborhoods like the Chicago City Worker! The guy in this truck was resting, thank God he is not a City worker with the I.G. following. Photo by Patrick McDonough

Picture take September 4, 2008. I hope you are aware the City of Chicago has a hardworking bunch of workers at the Bureau of Forestry. Thaw last storm we had taxed these workers to the limit. I was surprised that wards like Patrick “Phat” Levar’s in the 45th were left in disarray. Stumps and branches left all over the parkways and streets left his constituents very upset. His taxpaying public asked me what I could do, I told them to dial 311. I did not tell them about the way Mayor Daley and his friends really give services. First the Mayor takes care of his friends and wealthy neighbors, than the Commissioner’s Specials are next, then the Aldermanic requests, and Specials. I really feel sorry for the taxpayers of Chicago, we think we are all going to get services in the order they were called in. Remember, there is a pecking order, I would expect that from Republicans, but not Democrats. Workers told me they were not afforded overtime because the City of Chicago is broke. I am concerned leaving the public way in such poor condition, but that is me! Thanks for the hard work Bureau of Forestry. Photo by Patrick McDonough. 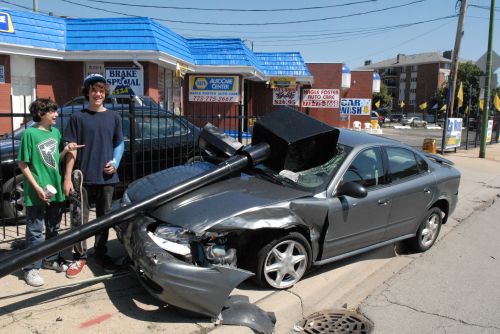 Not everyone is happy with Mayor Daley’s new tax generator, the Traffic camera. I have always been worried this visual pollution would become a road hazard. This camera toppled right where the drivers head would have hit the windshield. Not good. The kids pictured here were laughing hysterically. I pray for the driver. Well Chicago is broke and we need all the income we can get, so damned be everyone. I do not like traffic cameras in Chicago because they make drivers paranoid, they cause re-end collisions. This drivers attempt to remove the camera was not the way to do it. Vote out Daley and these lousy cameras. Photo by Patrick McDonough.

Chicago and State employees have a fair and decent pension. It could be better, but look at the corruption. We have been advised by several sources including the unions, Mayor Daley and many of his political goons are attempting to have a revision to Article XIII (13) Section 5 Pension and Retirement Rights. They want to remove the following "Membership in any pension or retirement system of the State, or any unit of local government or school district, or any agency, or instrumentality thereof, shall be an enforceable contractual relationship, the benefits of which shall not be diminished or impaired. " Contact your Political Clout Now! It seems the people in power are after the one promise that should be kept. Call your Union, Call your Local Representatives, and Call your State Representatives. Tell them NO, Do Not mess with our pensions. Use your talent to get anyone out of office that violates the trust. Mayor Daley must want to put the money in more of his family's hands.