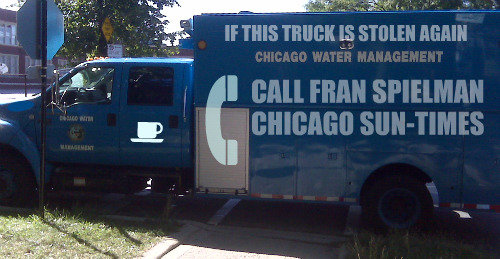 Please read article from Chicago Sun-Times Fran Spielman. Fran Spielman gets her own truck now… GPS tracks city truck taken on a joyride
Vehicle swiped while Water Management crew on fast-food run
September 15, 2010
BY FRAN SPIELMAN City Hall Reporter
Mayor Daley has installed GPS tracking systems in city vehicles to improve employee accountability and speed deployment of limited resources.
Little did he know one of the devices would be used to track down a stolen city truck taken for a joy ride.
A night investigator for the city’s Department of Water Management is in hot water after his truck was stolen early Saturday morning from the parking lot of a Burrito King on the Far Northwest Side.
The investigator and several members of his crew had apparently stopped for tacos, even though they are paid to work eight hours straight.
Thanks to GPS, the truck was recovered a few hours later at the Renaissance Apartments on River Road.
“Some time around 3 a.m. Saturday, we had a crew on the North Side having lunch. Apparently a truck was taken and driven for an hour or so,” said Water Management spokesman Tom LaPorte.
“It was recovered using GPS and found out in the O’Hare area. There was nothing altered on the truck. There was no theft. We have the truck back, and the driver is facing disciplinary action.”
LaPorte acknowledged that the crew was supposed to be working eight hours straight and was not authorized to stop for food.
The GPS system was activated by the so-called “leak desk” at the Jardine Water Filtration Plant.
Leak desk employees, assigned to answering phones and prioritizing repair requests, were at the center of a 2005 payroll scam.
Those accused of falsifying attendance records over a two-month period by swiping each other in and out included the brother-in-law of County Commissioner John Daley, the mayor’s brother.
The assignment has long been dominated by 11th Ward loyalists. The Department of Water Management was at the center of the Hired Truck scandal, which branched out into city hiring. Photo by Patrick mcDonough