In Chicago’s Sun Times, Monday April 23, 2007 edition, I looked at a photo of Former Marine Sgt. Ty Ziegel and his new wife. Ty Ziegel was still accepted by his longtime fiancee Renee Kline. The photo showed a marine that is physically and possibly mentally scared from the Iraq War. Ty will have to live with the effects of a suicide bomber attack, thank God he lived through this ordeal. Please see photo here: http://www.worldpressphoto.org/index.php?option=com_photogallery&task=view&id=875&Itemid=146&bandwidth=high] I was also proud to hear Prince Harry of England will represent his country with honor in Iraq. Prince Patrick Daley, son of Mayor Richard M. Daley will serve safety in the United States Homeland. Patrick Daley better watch out when he golfs with the Generals and enjoys High Tea with the Military Elite on Sunday afternoons. Give Mayor Daley credit, he made sure Patrick Daley will return from duty no worse for wear. I pray to God on my knees everyday for all the real heroes that serve on the front line. Tea and Crumpets Beauregard? Patrick McDonough. 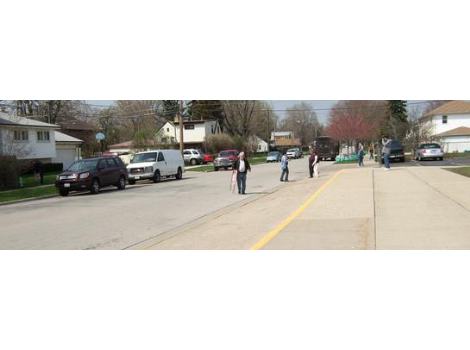 Thank you for your hard “Independent work” for Des Plaines Taxpayers. Helping the campaign that wants TIF’s as a standard business plan. Burkross, what side are you on? Why did you go to Patti’s Meet and Greet? Why did you threaten people with lawsuits? Why did you make threats to ruin Patti’s chances, with witnesses. Throw this fake out of town. Photo by Patrick McDonough’s Inspector General. 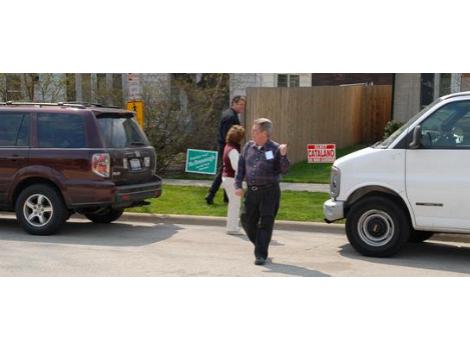 While out on assignment in Des Plaines, Illinois, I had to remind the current Alderman Tom Becker to stay away from the 100 foot line. Election Laws must be enforced to keep things equal for everyone. Also, the suburb had no Hispanic speaking interpreters at the polls. I provided Spanish speaking interpreters at every polling place, there was some resentment by some white candidates. Becker is a realtor and wants to stay on Des Plaines city boards that deal with airport issues. I think that will be good for his business after retirement. Look, what the heck is that man parking his car inside the 100 foot line? The Election Judge booted him out of the area. Photo by Patrick McDonough. 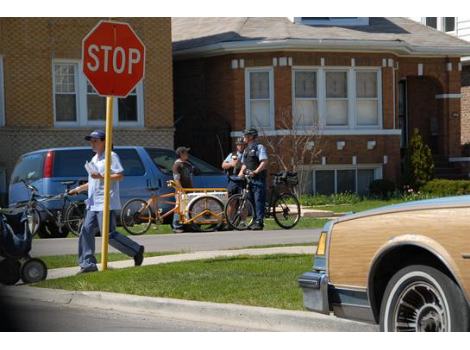 Last Friday, at 48th and Kedvale, Chicago Police gave a ticket to a young hispanic man that is selling Ice Cream. Mayor Daley is raising money off the backs of those who can least afford a major ticket. Well someone needs to pay for the Olympics right? That ticket to that poor man sure will “Stir the Soul” as his family struggles to put table scraps on a plate tonight. Do not get the wrong idea, I love my Chicago Police, they are just following orders. Photo by Patrick McDonough. 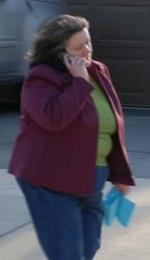 If you know who this is, let me know. She said she is an assistant committeeman. As we voiced our support for our choices in the April 17, election, she yelled at us and threatened us. She drove a car back and forth and was on the phone. Thank God we know the election law. If you know her please tell her we were exercising our constitutional rights. Quite complaining, this is still America. Photo by Patrick MCDonough. 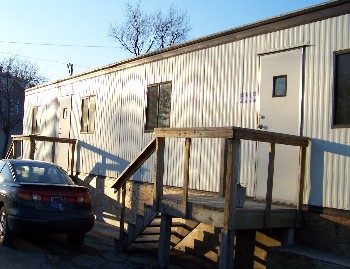 Chicago’s North District Water Management Employees are subject to rats and smells that are inhuman. In these rental trailers workers are getting sick. The Chicago Department of Health had visited before and did the best they could. They removed lots of dead rats and put sanitising solution. Please return again soon. Photo by “Deep River” my assistant investigator. Patrick McDonough.

Please enjoy the following pictures. I am having some difficulty with my editing and photo cropping so the quality is not up to par. On Election day in Des Plaines, a group of my friends decided to give the City of Des Plaines an outing party exposing the players that hide behind walls. I decided to pay Mr. Catalano’s home polling place a visit as this Becker backed candidate needed to be finished off. I thought Becker would have been smarter to play into our hands but he was not. In the morning, the States Attorney and the State Police were called. Panic set in because the election judges never saw a group of hard core political operatives. This was my gift for the dirty political papers and false accusations made by both male candidates. I cannot stand cowards that give hand-outs with phony organization names. The States Attorney and the States Police backed everyone past the 100 foot line which gave us control of the polling place. Becker violated the restrictions multiple times as did Catalano’s assistant which was in the picture. In every case including the harassment of Elections Judges was shut down by us. The Election Judges also were advised of illegal tactics by the other side. One lady in-front of an old couple voting was making complaints with the judges phone about Patti’s signs. Des Plaines police were sent to sit and watch the entire event which caused Catalano to lose. Becker and Brian Burkross, a political gadfly and windbag worked together planting Catalano’s signs. So the “political reformer” and big mouth Brian Burkross was helping the candidate that was opposite sides of his “Stop TIF”s). All day Brian Burkross screamed he will put our pictures in the front page of the Des Plaines Journal, he made multiple threats, promising multiple lawsuits. He bragged about his company that makes “computers” and than said the company made “buckets”. I think his company should make cheap pans and wooden spoons so he can attract more attention to himself and phony causes. The TIF campaign deal is over so now he want to become a political player. Brian should question the real estate deals, politicians with TIF real estate interests, Alderman gaming the system and conflicts of interest. Becker flipping on the Airport Expansion issues. Good luck to Mr. Walsten, I am looking forward to campaign promises fulfilled. 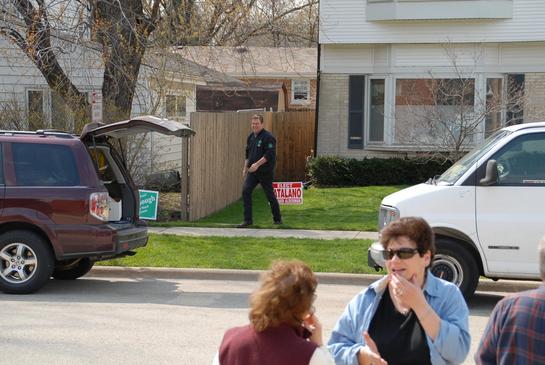 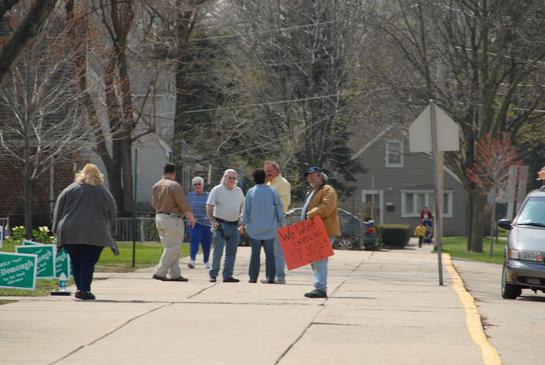 I know you read the Des Plaines Journal/ Brian Burkross paper. Everyone wants to show how free they are from any connections and clout. Burkross hates the evil TIF master Alderman Becker, but works closely with him in this election to elect Becker’s replacement. Patrick McDonough. 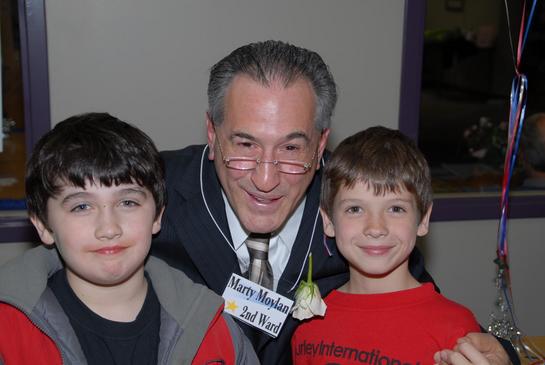 I have had this picture for a while. I waited until after the election to publish. Marty will be an excellent Alderman in Des Plaines. Alderman Moylan, I like the sound of that. My kids have a habit of drinking some soda pop that stains every time before pictures, oh well. Photo by Patrick McDonough