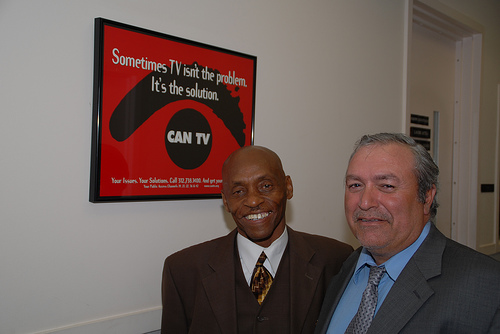 Mayor Daley, answer the questions, be a good Catholic.
Are we in the U.S.S.R. Mayor Daley? Read this answer from an American Chicago Mayor when asked about his Mob Buddies: ”I think it’s ridiculous,” fumed the mayor, refusing to answer, barking back at reporters, ”Any other questions?”
See post below from Carol Marin 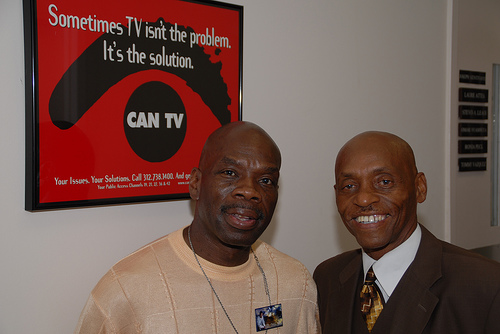 Chicago Clout takes on the difficult issue of torture against the innocent black men in Chicago. Mayor Daley was the States Attorney at the time and overlooked Jon Burge torture allegations. CLICK HERE FOR VIDEO: http://video.google.com/videoplay?docid=7025855807424039567 Chicago Taxpayers are paying millions of dollars to these beaten and tortured men. Torture investigations were rigged by Mayor Daley and his cronies. Wallace “Gator” Bradley a “Urban Translator, and Archie High of the Chicago Department of Water Management, discuss discrimination. This show is hosted by Frank Avila, a famous Chicago Attorney. Show is produced by Patrick McDonough. Photo by Patrick McDonough.

Please see this video, click here: http://video.google.com/videoplay?docid=6989562679783073174 John Zander and Maureen Egan terminate former NFL Football Hero and Department of Water Management Worker Steve Collier after finding out he was diagnosed with M.S. Steve hired Attorney Frank Avila to help get his job back. Chicago Clout is a show produced by Patrick McDonough to assist Chicago Employees get a voice. Photo by Patrick McDonough.

Last Sunday, I had a great time with Patrick, David, and Michael McDonough, my three sons. It was a boys time with Dad. Patrick is training with his Gator Board Wake-board. I received a call from a trusted friend and advisor. I have a feeling there will be less time for fun coming up soon. Photo by Patrick McDonough.

This is my father Chicago Plumbing Inspector Michael J. McDonough Ret. and The Honorable Martin E. McDonough.
Both of these men are great Chicago Political Heavy weights and well respected. Both brothers served the City of Chicago with grace and class. They continue to serve their family and community. I guess the cream always made it to the top in the old days. Now days, a different set of rules. (morals). Photo by Patrick McDonough.

Many Chicagoians do not know Chicago provides support for the Chicago Firefighters with the Department of Water Management. The hydrant crew and the Sewer Divisions assisted to get the sewers open and fix the fire hydrants. Read this story by ABC Channel 7 News.
July 13, 2007 – A grandfather who suffered burns to his hands grabbed his grandson and left the building after the child started an extra-alarm fire playing with matches on Friday afternoon on the South Side. The blaze claimed the life of two dogs.
The fire, which broke out about 1 p.m. at 3644 S. Parnell Ave. and spread to 3642 and 3646 S. Parnell Ave., was mostly under control as of 2:25 p.m. after an extra alarm was called “for manpower” about 2 p.m., according to Fire Media Affairs Director Larry Langford.
The grandfather, who suffered burns on his hands when he tried to put out the fire, which started near some furniture, said he didn’t want to be taken to the hospital and crews were treating him on the scene, Langford said. He still may be hospitalized, Langford said.
The man was watching his four- or five-year-old grandson, who was in another room of the 3644 S. Parnell Ave. building, when the fire broke out. The man tried to put the fire out but “it got away from him” and he “did the right thing” when he grabbed the boy and ran out of the building so fire crews could take over, Langford said.
The boy. who was not hurt, later told his grandfather that he had been playing with matches.
Another man was being treated on the scene for smoke inhalation because he went inside one of the buildings to try to rescue three dogs, Langford said. Two dogs died on the scene and one was revived.
The building at 3642 has a grocery store and a deli on the first floor and residences on the second.
Also parents should quit smoking for their kids safety. Photo by Patrick McDonough.

Read these two articles to get a taste of how the Chicago System works. click here http://www.chicagotribune.com/news/columnists/chi-kass11jul11,1,7747208.column?coll=chi-navrailnews-nav and click here: http://www.chicagotribune.com/news/columnists/chi-kass13jul13,1,664723.column?coll=chi-navrailnews-nav These show if the Chicago Press bring attention to problems, problems are solved. Also, the second article is the way Daley and company treat Chicago City workers with no clout. Patrick McDonough

Read this Article, things stink to high heaven in Daley corrupt and clout infested Building Department.
City puts building fee hike on hold:
July 12, 2007
BY FRAN SPIELMAN City Hall Reporter/ fspielman@suntimes.com
Two years ago, the City Council approved new building permit fees — tied to Mayor Daley’s 2006 budget — that were so high that Trump Tower’s tab alone would have jumped from $80,000 to nearly $1 million.
The construction industry raised the roof — so much so that the Jan. 1, 2006, effective date of the increases was pushed back repeatedly.
On Wednesday, the City Council’s Buildings Committee postponed the day of reckoning yet again — this time, until Jan. 1, 2008.
Even more important, aldermen were assured that the proposed increases will never take effect. Newly appointed Buildings Commissioner Richard Rodriguez plans to propose new rates that allow the city to recoup only the cost of processing permits and conducting inspections.
That wasn’t the case with the 2-year-old increases proposed by former Acting Construction and Permits Director Chris Bushell.
According to Buildings Committee Chairman Bernard Stone (50th), Bushell mistakenly copied building permit fees in New York, ignoring the legal limits imposed in Chicago. Now the first deputy in Construction and Permits, Bushell could not be reached for comment.
“We shouldn’t be losing money on handling permits. But, at the same time, we’re not supposed to be making money.”
Rodriguez said, “We’re just trying to make it more transparent. There’s no reason why taxpayers can’t go onto the Web site and calculate their own fees.”
Thanks Fran. Patrick McDonough 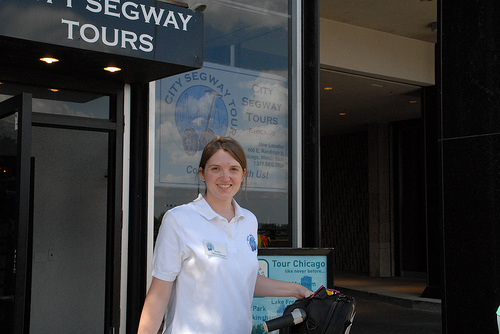 I recommend a tour that is actually worth the money. I asked everyone that went on this tour if they got their money’s worth. Every person had a big smile and had a blast. This is a picture of Kellye McGregor the Office Manager of this professional operation. It cost $70.00 for a three hour tour. This is money well spent, the equipment is in excellent condition, and all safety precautions are observed. Call 312-819-0186 or visit the website, click here, http://www.citysegwaytours.com Photo by Patrick McDonough.