I have selected some more photos from Frank Avila’s wedding that I wish to share. The mass was a traditional Latin mass. I was speaking with guests after the mass and I commented regarding the length and complexity of the service. I was not the official photographer, but it was an honor to be asked. The Church was astounding, the complex and religious artwork is stunning. Please see this Chicago Classical Church’s Website, click here: http://www.cantius.org/ I suggest if you want a wedding to remember, make this church your choice. The old world craftsmanship is everywhere. Photo by Patrick McDonough.

Many of Chicago’s Citizens have no idea of the dangers pulling over a car at night. Police could have someone pull a gun on them at anytime. These police do a great service at great peril. Make sure you show respect and help your Chicago Police. For years, the Chicago Police have gotten a bad rap due to a few bad cops. Burge stands out as does Jerome Finnigan. Cops murdering Cops? This goes on in Chicago because of cover-ups in the OPS. Just as we hate to hear a priest, mayor, or police officer betrayed the trust, we have to start listening to the good cops that expose these criminals. Mayor Daley has failed the citizens on this. Daley has used the Department as a revenue source. Daley knows well of the few bad apples and fails to act. I support the Chicago Police, but they must get rid of the rotten few. Photo by Patrick McDonough.

Mayor Daley put on a cubs cap, and any or all possibility, was lost, of the Northsiders winning a baseball championship. When a 11th ward crook wears a cubs cap, the end must be near. The Chicago Northsiders support the Cubs knowing the Cubs will lose. I think the Daley Cub cap helped the Northsiders lose in a very short order. 1,2,3, gone.
Sorry to John McDonough. Patrick McDonough.

“As employees of the City of Chicago we all have an obligation to make a solid commitment to the efficient and effective delivery of city services”.
A. Adolf Hitler
B. Mara Georges
C. The Chicago Cubs
D. The Chicago Bears
E. Patrick D. McDonough
F. Richard M. Daley

Please enjoy this editorial from the Chicago Tribune. Bottom line, the Chicago City Lawyers lie repeatedly to the Judges. I always thought everyone presents their case in a honest manner, respecting the laws as written. Someone at Chicago’s Law Department must have ordered the Chicago Lawyers to lie, which leads me to believe the culture of corruption, scare tactics, and retaliation, is alive and well in the Mara Georges Office. I would quit working for the City of Chicago, as a lawyer, if a supervisor ever asked me to lie in-front of a judge. The law requires this activity to be reported, it never has happened. Many of City of Chicago’s lawyers are not the top college graduates. Many quit Mara Georges rein after a short stay. I think the newspapers would best serve Chicago if they looked into the Law Department, as closely as the Building Department. See the Editioral below. On the same page, the Tribune wants the Olympics so bad, they are seem ready to “look the other way”, to land the Olympics. Patrick McDonough

Final Vote. 1134 Teamsters made proper votes. 974 voted YES. 159 voted No. One Teamster (From the 11 Ward) had his vote voided. Teamsters had a chance to make some historic gains. Better luck next time. Do not forget where the unemployment line is boys. Special thanks to my Teamster Inspector General. Patrick McDonough.

Chicago is investigating “Violence in the Workplace”. (Insert joke here) I left a message today for Michael Shakman to explain just how it really works, read below. Patrick McDonough 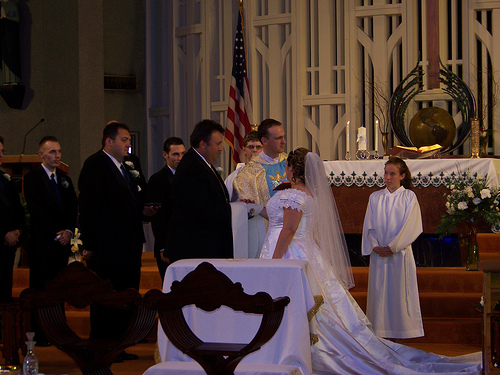 On September 29, 2007, Bruce Randazzo walked his daughter down the isle. We are happy for Susan and Paul as they enjoyed their wedding at St. Francis Borgia Catholic Church, in Chicago. Good luck. Photo by Proud Father Bruce Randazzo. Someone tell Bruce to leave the photos to me. Patrick McDonough.

After being swamped with last-minute claims from people who say they lacked the political clout to get jobs in Mayor Richard Daley’s administration, a court-appointed official said Monday that she probably will need more time to determine how much — if anything — each is owed.

Friday was the deadline for filing claims under an agreement between the city and lawyer Michael Shakman to end Shakman’s long-running court battle against political hiring at City Hall. The agreement required the city to set up a $12 million fund to pay as much as $100,000 each to employees and job-seekers who were denied jobs, promotions, transfers and overtime work because they did not have political connections.Noelle Brennan, the court-appointed official who has monitored city hiring for the last two years, said 1,451 people filed claims alleging that they were harmed by the city’s actions between the beginning of 2000 and the end of last May. Brennan did not know the total value of the claims filed but said requested awards are probably more than $12 million.

More than 600 of the claims came into Brennan’s office on Thursday and Friday — some as late as the final deadline of midnight Friday. As a result, Brennan, who was scheduled to decide on award payments by the end of December, said she would likely ask a federal judge for an extension.

“I think this will be an enormous undertaking,” Brennan said. “The universe of information that we have to investigate to substantiate these claims is very, very large and we want to be able to verify all claims that are submitted accurately and fairly so that everybody gets the award they are entitled to.”

Under the decades-old Shakman civil decree, the city pledged to keep most hiring decisions free from politics. However, Brennan and federal authorities investigating a criminal job-rigging scheme at City Hall have found that administration officials routinely violated the court order.

The people who filed claims with Brennan contend they suffered because of City Hall’s policy of political favoritism.
Archie High, a laborer in the city’s Water Management Department, filed a claim in September for $100,000, alleging that he was passed over twice for promotions because he lacked clout.

“They asked me who my clout was. I said I’ve got experience. I don’t need clout,” said High, who has been with the city for 33 years. “They said, ‘Yes you do.’

“I shouldn’t have to go out there and knock on doors for some politician to get a job.”
Despite the influx of last-minute claims, Shakman said he thinks far fewer people filed with Brennan than were actually harmed by political hiring. Shakman believes many people didn’t file because they weren’t aware they had been victims of a rigged hiring process. In addition, some current city workers were afraid they would face retaliation by their bosses if they filed claims, he said.

Shakman said his agreement with the city prohibits such retaliation, but “people are not sure how much reliance they can place on a court order.”

(Response) Thank you very much to Chicago Tribune for publishing this atricle. Again, I am sure a proper investigation will never be undertaken. Every Chicago employee should be asked about their personal experience. A complete record should be made and never will. Mayor Daley will get off the hook again. Chicago will never understand Demoracy with the Daley “family” in power Patrick McDonough

I sure hope you op-ed out. If you do the math, you will get about 8-9,000.00 apiece as settlement. This is lousy for anyone that accepted the Shakman settlement. Years of phony promotions, cheated out of overtime, lower pensions. Read Fran Spielman’s take, click below. This is a sad chapter for Chicago City Workers. Patrick McDonough.